Well, this is getting embarrassing.  Another slow weekend, and not much zombie gaming goodness.  Real life keeps throwing curve balls my way.  This week we managed to put a new roof on the house.  Pretty easy in miniature, but way more work in real life!

I did manage to get figures done for Trisha and Blake.  They are both straight builds from Wargames Factory Survivor sets.  I have them posed on the nearly complete parking garage.
The parking garage is almost complete.  I still need to add some signs, and just some details to make it look more complete.
Like I said, not much of an update this week, but progress is being made...slowly.
Posted by Nobody667 at 6:52 PM 10 comments:

Zombie 15', The End of Innocence

I managed to find a chance to play through the first two scenarios in the campaign book for Zombie 15'.  I played this solo, which is not a very difficult stretch for the game, but not standard for the rules.  I decided to play as four characters, which is the recommended number of survivors, by randomly selecting four characters.  I probably could have just gone with 2 characters, but I'm trying to understand how this game works.
This is a very cooperative game.  Everyone must make it to the exit points, or nobody survives.  This may mean one character must carry another to the finish line if they are knocked unconscious.

Some good points:  There are a lot of tiles to make the game board.  There are 32 double sided tiles, which gives a lot of replay options, and setting up unique scenarios.  It comes with 99 zombies (plus one large abomination zombie) and figs for each survivor (8 figs).  There are no dice, the game mechanics are purely a compare scores type of mechanic.  I did find once I understood how the game worked, it can move very fast.

A couple of "bad" points:  With so many tiles, setup can get a bit tedious.  I swear it took longer to setup than to play.  Any game is going to be at most 15 minutes, which may or may not be a bad thing.  Characters are preset, although there are plenty to choose from, and I doubt it would be difficult to create new characters.  You need to have a CD player to play the game, and it needs to be quiet enough to hear it.

I did find it very difficult to get pictures during play.  With the timer going (the included soundtrack) I didn't really want to stop to take picture.  (I could have paused the music, but of course that didn't occur to me right away...)

The four characters I played (I did a random draw, they also have a random weapon for the sceanrio):

The first two scenarios are linked, and use nearly the same map setup.  For the start, everyone has to get to the police station.  Each character starts in their own 'home' roughly equidistant from the station.  With the starting weapons, they can't make it, so they will need to search and find new weapons to get them to the exit.  In addition, none of the characters have their special powers yet, in the 'prologue' they are much more generic.
Play is fast, which it needs to be for a timed game.  Each player get 4 actions, moving or attacking take 1 action each, as does searching.  You can only move if there are no zombies present where you are (you can move into contact though.)  You can only search certain areas (outlined in yellow dotted lines) and these areas count as a separate area compared to the rest of the tile (and require an action to move into.)

Combat is simple, you spend an action and remove a number of zombie equal to your weapon rating.  Each weapon then reduces ammo or 'wear' by one pip.  This means eventually you'll need either more ammo, new weapons or a way to repair them.  Each weapon has an attack, and a 'hold off' value which is used to compare during the zombies turn to attack.  Each character can stand with a number of zombies equal to a total of their defense score.  Multiple players can add their scores together, which makes sense for how cooperative this game is.
As I said, it was hard to take 'in game pics' due to the time limit.  It does move very fast once you understand what is going on, and have a plan...
As you would expect, the first scenario is pretty easy, and is meant to show how the game mechanics work.  After a few turns, I lost track of time - until the sirens sounded on the soundtrack!  There are sirens at half way, at one minute left and at the very end.  I couldn't remember if it was the halfway or one minute mark, but the music was definitely up-paced.  I ended up rushing the last few moves, which was actually fine, the roads were pretty clear, and everyone just had to run to the final tile.

Honestly, I figured the soundtrack would be just a gimmick, and cheesy.  I was wrong, it does add a nice feeling to the game, and is much more exciting compared to a sand timer or clock.
Part two of the scenario requires the characters to clear the board and get to a parking lot (which has 4 zombies on it) again starting with some generic fixed weapons (in this case hockey sticks.)  I decided to split the group into two groups, each working to clear a half of the neighborhood.  Everyone would need to find weapons, and some decent ones to deal with the larger number at the end.
As I said, this is a very cooperative game.  Using the characters in pairs made a big difference in getting the game done.  If the players don't work together, it will not end well.  Again, the soundtrack helped keep things moving, and added a lot of tension to the game.

The first couple of scenarios did a good job of showing the mechanics of the game.  I am looking forward to playing the rest of the campaign (it has 15 total scenarios) I should have some other players lined up...

I would recommend this to anyone looking for a zombie apocalypse game that isn't quite so 'random' as it doesn't have dice.  It plays fast, but you still need strategy to get through the mission objectives.  The pieces it comes with seem useful for any zombie horde collection.  Requiring a CD player to play the game is the only real limitation on playing.
Posted by Nobody667 at 8:19 PM 6 comments:

Things have been a bit slow here, work has conspired to keep me from completing any sort of gaming related goodness, and the holiday weekend (Memorial Day here in the US) threw a family monkey-wrench into my plans... 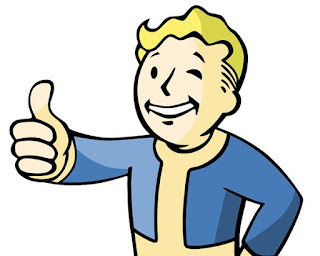 The Fallout series of games is one of my personal favorites, and Bethesda announced Fallout 4 today.  I have to say it looks pretty.  I am a bit concerned by the rocket powered pirate galleon, but Fallout has always had some oddball stuff, so I won't worry until I see it in action.  Hopefully they have done a decent job on the story, which was a bit dubious in New Vegas, IMHO.  It will be interesting to see Boston after the apocalypse, I expect it to be wicked cool.
About the only thing I managed to complete was a ruined car, a VW Bug.  I found it for cheap, as it was already broken, missing the doors.  It wasn't very hard to make look much worse.  I am very happy with the damaged windows, I think they look like they have 'spiderwebbed' like safety glass is supposed to when broken.
In more zombie related news, I did get a copy of Zombie 15' and have unboxed it.  It is an interesting concept, with the game played in real time.  Each mission has a time limit, and the game comes with a CD with three different timed tracks (with zombie groans signaling an increase in the 'horde') at different time intervals.

The minis for the zombies look okay, and I think will scale well for 28mm.  The survivors/heroes are lacking a bit in detail, and are on the small side.  They are supposed to be kids or teens, but I don't know if even a good paint job will make them fit in well for miniature gaming.  I'm hoping to get a chance to play it in the next couple of weeks.  I will post a game report once I get a chance to play it.  I wish it had an option for solo play.
I have a ton of projects underway, hopefully I'll get something done and get a game in as well.

Oh, and this craziness:  Kung Fury!