Welcome to the Jungle!

This week I tried out Zombie Island from The Flux Capacity.  My wife and I have taken turns playing the survivors and the zombie master.  The game has been reviewed on Board Game Geek, where is gets a 5.6 out of 10.  I'll try and give a complete review as well.
First, unboxing shows pretty good production values, I was impressed with the weight of the box and the tiles that make up the bulk of the components.  Both are of a good quality cardstock.  I was also impressed that they added a few tiles for future expansion.  That was a nice surprise.
There are not many miniatures, and they are a bit disappointing.  While they are made of decent quality plastic, they are very sloppy casts or prints.  It's too bad, they could have been a good feature for the game.
I tried to show the best figs I could find, they are all about the same quality.  Very sloppy looking, but they are a hard plastic.  I may still paint them up, if I feel ambitious.
The game premise is pretty straightforward.  The 'explorers' move through the jungle, looking to discover 26 tiles.  Four of the tiles have zombie spawn points, marked with a 'Z'.  Humans can move an unlimited distance, where the zombies can only move 3 spaces, and can only enter one new tile per move.  All movement is straight line only (think the queen from chess).
Once a survivor reveals all the tiles, they are trying to get back to the beach.  Meanwhile, the zombie master is slowly losing control of their minions, so the explorer can simply outlast the zombies.
The explorer gets up to 4 'machete tiles' to modify the board as they move.  These allow for movement through areas that are impassable.  It also allows for the game to change each time.  They can also be used for an escape from a bad situation...

Game play is pretty fast.  While the explorer has a machete, if a zombie makes contact, that's it.  No combat at all.  Playing as a match, with players trading sides has been fun.  There are a couple of scenarios, but they are all basically the same, with up to 3 explorers on the board at the same time.
While the game is fun and quick, it is pretty limited.  I would have hoped for some additional missions, with alternate tile usage perhaps.  Overall I would say it's a fun quick game, but not one to replace something like Zombicide.  It reminds me of Twilight Creations Zombies!!! game, without the randomness of the various cards.

I would recommend this game for a quick pick up game or if you want to have a zombie themed game with people who find Zombicide too daunting.  It really plays pretty fast so it's not a huge investment from that standpoint.  I wish the miniatures had been a bit better, but overall the components were good quality.

It's Father's Day in the US, so I'd like to send a happy Father's Day to all the fathers out there.  I hope you had a great day! 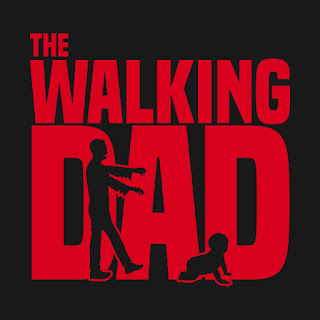 I had my two nephews visit this weekend.  They are 2 and 6, and now I realize why I am glad my kids are 21 and 23!  Not much for gaming, but I did get a couple of great zombie themed games to try out.

First is The Walking Dead: All Out War.  I have not played it, but have seen it played in a few places and it certainly looks cool.  I'm looking forward to at least painting the minis and adding them to my ATZ games.

Second is called Zombie Island.  I have never heard of this game, my wife found it at a game store that specializes in out of print games and accessories.  I haven't had a chance to unbox it yet, but I plan on breaking it out and posting a game recap.  It sounds like fun, you are an "explorer" making your way through a jungle infested with zombies.  That is what I have gotten from a quick read of the box...

It was a busy and tiring weekend.  Hopefully Fear the Walking Dead tonight doesn't disappoint!
Posted by Nobody667 at 5:10 PM 12 comments:

Email ThisBlogThis!Share to TwitterShare to FacebookShare to Pinterest
Labels: board games, games, Other

I found an older muscle car toy at a second hand shop, and it inspired me to create a post-apocalyptic ride.  It was red and beat up pretty bad, the rear window was missing, wheels damaged, chipped bumper, not a wreck, but in bad shape.  I'm sure you all know the inspiration for this vehicle...
I added some fuel tanks to the rear window area (taken from a truck) as they fir the space pretty well.  The front end has a reinforced bumper made from wire and sprue parts.  I also added wire mesh to the windows, they need some protection.  Overall a rust and dirty paint job finished the cruiser.
Pretty much straightforward, a rusty beat up muscle car.  Some reinforcement and extra fuel tanks for the long empty roads...
Posted by Nobody667 at 6:54 PM 10 comments:

A quick post of some projects.  I have some specialized zombies, armed with hand weapons.  One of the random event cards has a zombie armed with a hand weapon, which increases it's impact rating by 1.  Under the new melee rules, I have the zombies gain +1d6 in combat, just like a living opponent.

These zombies are not using the weapons, they are just armed with them.  Given the way zombies fight, the mere presence of the weapons makes them more dangerous.  If defeated they could be a source for weapons, which could make them worth dealing with.

I also painted a toy, or part of a toy I had found at a second hand store.  Nothing fancy, I figure it will make a nice piece of ruined scenery.
Not too much done this week, but still progress.  I'm hoping to finish off some more small scenery bits and some other projects on my workbench.
Posted by Nobody667 at 7:09 PM 7 comments: