"They killed Tyrone and Pete Two-guns.  We don't let anyone get away with disrespecting us!"  John was worked up and his deep booming voice was intimidating.  "We are going to hunt them down and punish them for their attack!"  Hoisting his new assault rifle high over his head he yelled "Just like those army pukes!"

Cheers erupted from the assembled gang members, their camp around the backwoods bar erupting in cheers and whoops.  Several men banged melee weapons together, adding to the cacophony.  As the sound died down, a young, tattooed man stood out from the crowd and shouted out "Where do we strike?  How do you know we'll find them?  Why chase down a car when we can go after the weaklings in Bloomer?"

Johns eyes narrowed, and he squared himself to face the accuser.  "Scott, you're not in charge.  I am, and I say they will be at ruins at Jackson Corner.  It's the place that makes the most sense."  Before Scott could reply, he continued.  "The bastards killed some of our own.  We don't let that go unpunished!  We'll deal with Bloomer later."  More cheers erupted and Scott crossed his arms and stood quiet.

"I want bikers to approach on highway 25, Sally and I will lead a team along 64 and we'll meet at the intersection."  John directed the various groups and organized the pursuit.  As a group of motorcycles roared away from the camp, John and his team piled into a pair of pickup trucks.  John paused to pull Sally aside as they moved to the trucks.

Sally laughed and moved close to John.  "I'm ready for anything!"  She suggestively said with a smirk.  "Are you up for this?"

John grabbed Sally's ass as he planted a kiss on her lips.  "Let's get theses bastards and get back to the shack."  He whispered to her as she giggled and groped his crotch.  "We'll finish this later!" He laughed and they jumped into their truck.
This is going to start from the point of view of the gang members from the previous mission.  (Thanks for the suggestion Zabadak!)  They are hunting down Dawn and her team, seeking revenge for two fallen comrades.  I will have a few different rules for this scenario, and I will switch to Dawn's team when the two groups make contact.

This will be in deep night, with 6" vision limits.  It is ER 4, there are three PEFs, but they will not move.  In addition, while they will be triggered by any ganger, while I play the gangers, when I switch to Team Dawn, they will only be triggered by the survivors.  There are 10 zombies on the board to start, they will move towards any noise, but suffer from the same 6" LOS as everyone else.

Dawn's team is going to be in a random location, I have 5 chips marked 1-5, they will be in location 1.  Each time one of the buildings is opened, a sound of 1 is generated, which will attract active zombies, unless they already have a target (such as line of sight to a living human) but not spawn any more.  For each point of sound generated, I will roll 1 die, looking for a success, representing the survivors hearing things happening and become alert.  Once the gang 'finds' Dawn's group, there will be a surprise roll (similar to a zombie surprise roll) with the gang rolling a number of dice equal to their highest rep.  The higher total gets the drop on the other, I will use the difference as a judge for how much advantage either side gets.
2.  Other actions, such as gunfire or moving through the pond will also generate noise, as above.  Gunfire will count double for rolling for surprise for Dawn's group.  (Gunfire mean living and probably dangerous...)
3.  Doubles for initiative will not count towards Beckie's infection.  Instead, each doubles rolled add to the chance the bikers enter the table.  Doubles less than the number on the marker means the bikers enter.  In addition, they can be signaled to enter, or after the first gunfire, and will arrive d6 turns later.
4.  Once the gang finds the survivors, I will switch to playing Dawn & friends.  The gang will act aggressively, but I will still roll the NPC actions table, but move as aggressively as I can, when directed.

The gang is divided into three groups: 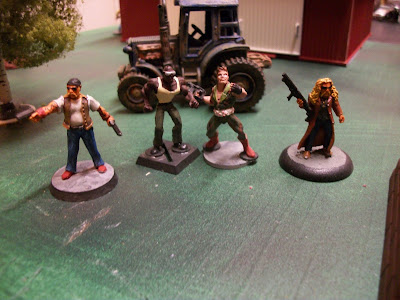 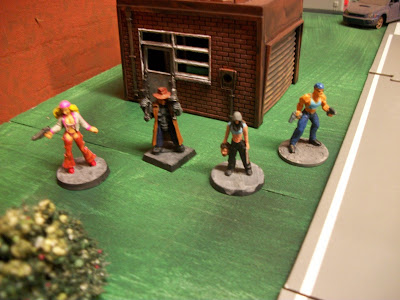 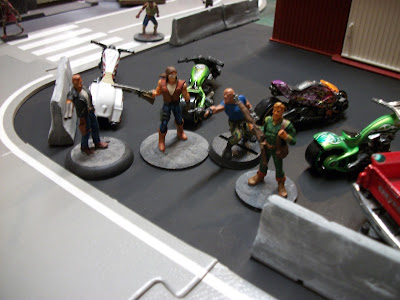 Groups one and two enter on either side of the main road and start off attacking nearby zombies as they move to check the first buildings.

John pulled his knife free of the skull of the dead farmer as it slumped next to the tractor.  Shaking it clean, he motioned the rest of the boys towards the garage nearby.  He whispered to the "I'll get the doors.  Let's see if those bastards are here."
The first building is bust, and John and his group moves on.  They decide to try skirt the edge opposite the rest of the table, hopefully keeping the zombies away from the gang.
Meanwhile, Sally lead group two to the nearby garage.  Opening the door, she finds it empty as well.  With the nearby PEF, the group moves up to reveal it.  I'd rather not find a bunch of zombies in the ruins when others move up.

It's getting tough to keep the zombies away enough to avoid shooting.  I don't want gunfire to occur too soon, or the ambush could turn out badly.  (okay, well actually that would be fine, I want Dawn and company to have a better chance, but I am trying to play this straight.)

The zombies go first and move up, catching Sally, but falling short of the rest of her team.
She cuts them down and charges the remaining zombie near the team.  When she charges, she triggers the PEF.
Sally heard a loud splash and then thrashing in the pond nearby.  In the deep dark, she could just make out the dark pool of water, as a second splash broke the quiet.  “Damn things are going let them know we’re coming!” she whispered harshly.
“Those thing stumble around all the time.  Nobody will think twice about it.”  Gary replied.
Two zombies enter the pond of water, splashing as they wade across.  I add this as a unit of noise for each.  The survivors pass 2d again, giving them a total of 4 dice for surprise.  Hopefully they are awake and alert!

Traci heard the splashing, she remembered a pond nearby, but the zombies had been avoiding it.  The earlier sounds of doors opening had her jittery, and she woke up Dawn.  “I think something is going on out there.”  Traci said as Dawn came awake, even as Jack let out a soft snore.
“It’s probably just zombies crashing into things.  They do wander around you know.”  Dawn said as she listened to the zombies exit the pond.  “Still, there could be something out there.”
Traci stood with Dawn for a bit, listening to the deep night again.  After a couple of minutes she shook her head and said “Go back to sleep.  I’m just imagining things.”
“Are you sure?  It’s getting close to sunrise, I can stay up with you if you’d like.”  Dawn offered.
“Nah, I got this.  I need to just stay calm.”  Traci batted her eyes at Dawn.  “Besides I can think of much better ways to pass the time if we’re both awake.”  She added a giggle.
With a sigh and a shake of her head Dawn went back to her sleeping bag.  “I think Jack would appreciate your ideas more than me.”  She commented, laying back down.
Traci smiled and laughed.  “You never know 'til you try!”  She walked back to the garage door, her sub-machine gun at the ready.  Still giggling Traci resumed her watch.
John leads his team around the building, and the zombies attracted to the noise earlier wander around the tractor.  They move ahead, towards the second large garage.
Sally and her team start to move wide around where the zombies are going to be after coming out of the pond.  As I look at that move, I realize the zombies are going to be able to see someone, and then when the zeds charge, gunfire is almost guaranteed.  I decide they will just attack the zombies and fight through the ruins.  It will be a faster route to the center of the board and a possible location anyway.

Sally and her group move towards the central ruins and John moves up to inspect the last large garage.

John crept quietly towards the open garage door.  As he got closer, he could see the front end of a car parked just inside.  “That wasn’t here before.  We got you!”  he thought.  Pausing he signaled his team, pointing at Tyson to signal the bikers.
As the rest of the team moved to the front of the car, Tyson flashed his flashlight towards the north a half dozen times.  He saw lights in the distance, and the deep rumble of the choppers as they fired up and started to approach.  Putting away his flashlight, he drew his pistol, ready for action.

Okay, this is it.  The survivors are in the last large garage.  The bikers have been signaled, they will arrive in 3 turns.  As the gang approaches, I do a quick layout, and then roll for surprise.  Team Dawn is rolling 5 dice, having gotten 5 out of 6 successes previously, and John is rolling 5 dice.  A nice even match, whoever rolls highest will be at an advantage, and how much of an advantage will depend on the difference.

Rolling, Dawn gets 2 successes and John gets all 5!  Ouch, this is pretty much a complete ambush.  Traci is in a bad location, towards the back of the garage, but is active at least, for the inevitable In Sight check.  I say Dawn has on her body armor, so hopefully she can act after getting shot.  Beckie, even though infected, I place close to the car.  Her shotgun should help even things out if we can make it past the first round of shooting.

I do momentarily consider waiting a turn or two for the other group to get closer, or the bikers to arrive.  I figure the surprise is going to be devastating, so I might as well use it.  I roll an in sight, and Traci gets one success to John's four.  The rest of team doesn't even get to roll.  The shooting goes well for the gang...

...but not too well.  Dawn and Beckie are still alive and able to act.  Two on four (or eight or twelve!) are not good odds, but we'll see if they can fight their way out.

On a side note, it has been a crazy month.  I've had a couple of weekends that I had to work, and my shifts have been 12 hours.  Long days and then some family obligations.  I held off publishing this until I had most of the second part done, so it won't be too long to see the conclusion.  Funny how life hits you sometimes.