Now:
“Good morning, this Jay in the morning on KZMB, with the morning cruise.  Marci is just coming in – listen folks stay off the highway this morning!  There are delays through the whole area, with reports of several accidents and general congestion.  Marci, you got caught on the way in, what did you see?”

“There were at least two full-on wrecks out there!  It looked like crazy bumper cars, plus at least at one of the people were still wandering around a bit dazed.  Some drivers had stopped and were trying to keep them calm until the ambulances arrived, but there were definitely people hurt.”

“Hopefully everyone gets to the hospital, and authorities can get things under control.  We’ll be back after this short commercial.”

Mark was glad to be on the side streets, which were actually pretty empty right now.   It was still early, just past 6am, so that wasn't much of a surprise.  Still, hearing about the traffic on the highway, and not seeing any signs of traffic made Mark chuckle.

Mark turned into the construction site, surprised to see only one truck in the lot.  It should have been full, they needed to get the walls roughed in today, or there would be hell to pay.  Parking by the office trailer, Mark started walking into the site when he stopped short - there was a body laying just past the employee entrance. 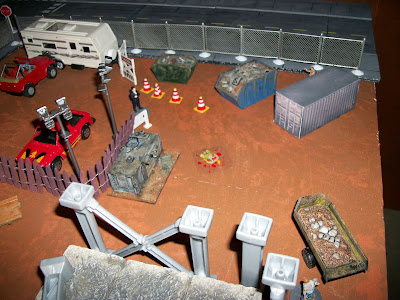 Mark passed 2d on a rep check to see if he would panic from a dead body.  Mark moved to investigate and see if the body was dead or just hurt.  As he was investigating his fallen employee, a low moan and shuffling of feet alerted Mark that something was wrong.  Grabbing a roofing hammer (improvised weapon) Mark faced two zombies - and passed his Zed or no Zed check with 1d.

Yikes!  Melee is a bit different from ATZ:BDTZ, so this took me a bit of time to get right.  Mark fought a round with one zombie (the other came up short, which was the plan for this scenario anyway) and won by 1 success.  Predictably, the zombie was just knocked over.  Mark tried to finish him off, but still came up with only a knocked down.  Mark retreated to the parking lot - trying to make for his truck.

Mark managed to stay ahead of the two shambling zombies, but had trouble getting his jeep started!  Damn the car won't start rule!  Even with two free activations (zombies scored 5 and 6 to his 2 and 3 for activation) the Jeep wouldn't start...  Eventually it did start, but the zombies were close enough to charge!

Well, at least the Jeep helped here - one zombie got plowed under and killed.  The other pulled up to the side, only to loose the melee.  For once, it wasn't even close.  Of course, that means it just fell off, but it let Mark drive away - heading for Pamela's work.  Hopefully she had her cell phone still.  Mark started trying to get through...

All told, the scenario was a success and I managed to learn the differences for melee between BDTZ and FFO.  I was happy to see a win, and decided Mark would head to his wife's job next.  I will run a scenario with her, and see if she is where Mark expects.